LaMarcus Aldridge has been cleared by the NBA to play basketball after a heart condition forced him to retire last season. He has signed a one-year deal with the Brooklyn Nets for $2.6 million. The Nets traded away center DeAndre Jordan right before this signing, so Aldridge is expected to play a fairly large role on the team. This is amazing news for a player that was forced to end his career and seemingly wasn’t going to get to go out on his own terms. Now the veteran center can continue to play the sport he loves.

After retiring with heart concerns five months ago, seven-time All-Star forward LaMarcus Aldridge is returning on a one-year, $2.6 million deal with the Brooklyn Nets, his agent Jeff Schwartz of @excelbasketball tells ESPN.

There seems to be a feeling in the NBA that a matchup between the Brooklyn Nets and Los Angeles Lakers in the NBA Finals is inevitable. Aldridge still has plenty of talent and ability left to show on an NBA court. He has never won an NBA Championship and that is clearly his goal this season with the Brooklyn Nets. This signing brings back Aldridge, who is already familiar with the playbook and the best players on the team.

Two NBA teams currently have 7 of the top 8 active players in career points ??

Last season after leaving the Spurs, LaMarcus Aldridge only got to play five games with Brooklyn before he was forced to retire. He did show promise in those games and now he gets a chance at a full season with the team. 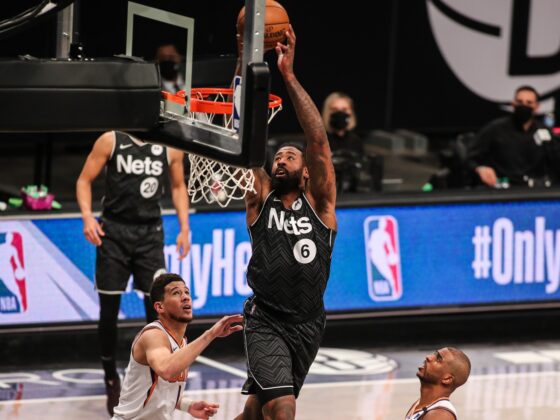 DeAndre Jordan Intends to Sign with Lakers After Buyout