JaVale McGee is a two-time ‘Shaqtin a Fool’ MVP. He’s also a member of the Golden State Warriors fighting to make the roster of a team headlined by Kevin Durant, Stephen Curry, Klay Thompson and Draymond Green.

McGee joined the Dubs this summer after a small role with the Dallas Mavericks last season in an attempt to restore what once was a promising NBA career. The ceiling was high for him after being drafted by the Washington Wizards with the 18th pick in the 2008 NBA Draft. He’s an athletic seven-footer who can block shots and put down some strong dunks. Unfortunately for him, the notion almost immediately was that he is a player who is injury prone and a guy who doesn’t have a high basketball IQ.

Some think he’s dumb and doesn’t deserve to be on any NBA team. From the Wizards to the Denver Nuggets then off to the Philadelphia 76ers and ending with the Mavs last season, everywhere he’s gone, people have just laughed. It’s not an entirely bad thing to be entertaining on the court. McGee can always be seen smiling and laughing with his teammates, having a great time on the hardwood. But when the notion oh him is just that of a joke and not a pretty good rotation big man, eventually it gets to be a tired narrative.

McGee is only 28 years old but he might be on his last legs in the NBA. With the Warriors, he joins a team in need of some serious experienced front court depth. He could fill that role and also shed a bad reputation in the process.

Following from Anthony V Slater of The Mercury News.

Then July came and the phone was quiet again, even as the Timofey Mozgovs of the world racked up big deals in a market flush with money.

“It’s definitely the injury,” McGee said. “Because I haven’t done anything else in this league to not be on a team. I haven’t had any drug cases, I haven’t had any DUIs. I’m not a bad guy. You can’t go to one person in the league and they’ll say ‘JaVale is a bad guy, a bad influence.’ You know what I’m saying? I don’t go out. I don’t drink. It has to be the injury. That’s the only logical thing.”

McGee’s reputation is a bit more complicated than that. (TNT) started a show called Shaqtin’ a Fool before the 2011 season. Shaquille O’Neal hosts. They uncover bloopers from across the league and then showcase them, while Shaq dogs the victims. McGee became a regular target, even winning the show’s ‘MVP’ its first two seasons.

Shaqtin’ a Fool became popular. McGee was its unwilling star. It morphed into a label he couldn’t shake. Strangers chided him about it in public. McGee privately seethed, most upset, he said, that it was on the league’s network.

“Fans think it’s real, like that’s real life and they think I’m a dumb person,” McGee said. “It’s just really disappointing that grown men, 50, 40-year-olds are having America’s funniest home videos of a player. And then making it a hashtag and really just trying to ruin someone’s career over basketball mistakes.”

“We have the same type of humor,” Iguodala said. “He’s into like geeky things. I think people don’t realize that he was kind of nerdy, geeky before he played basketball… He has this funny line: ‘You can be smart and act dumb, but you can’t be dumb and act smart.’”

Everyone knows those famous McGee ‘shaqtin’ plays. The ones where he gets lost on defense and runs the wrong way or trips over himself when handling the ball or even the hundreds of internet memes of him making silly faces. He’s been viewed as a joke for years. Now he’s ready to prove everyone wrong.

He’s not the best player in the world but he is a very solid NBA player. With the Warriors looking to find any type of bench contribution on the cheap, McGee might be able to fill that void. Looking at his competition on the Dubs, primarily rookies and younger players, he might have a legit shot to make the team.

VIDEO: Tobias Harris Takes You Through His Summer Workout Routine 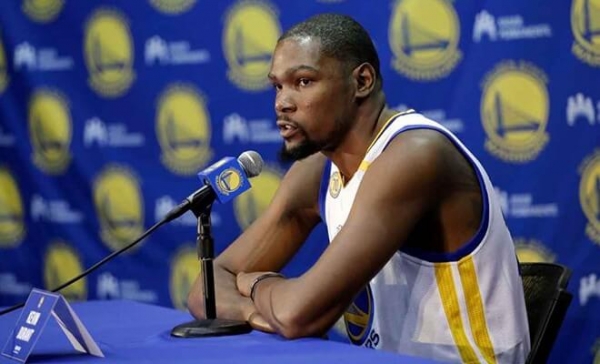