There’s so much we can say about Justin Timberlake that we might even fill a novel without getting to tell everything that defines such a hugely talented individual. He stepped into the spotlight at age 12, starring in the Disney Channel’s “The Mickey Mouse Club” revival, alongside Ryan Gosling, Britney Spears and Christina Aguilera. Then in 1995, he became an instant teen idol with his boy band *NSYNC. After the pop group’s immense success, Timberlake decided to follow his heart and went solo in 2002, releasing his debut album, Justified. After the Grammy-winning album, he proved he could run solo maintained his success as a solo artist with FutureSex/LoveSounds in 2006, the two-part The 20/20 Experience in 2013 and Man of the Woods in 2018.

Aside from a notable music career, Timberlake also proved himself a talented actor. In this article, we will list his best movies so far.

Justin stares as Richie Furst, a bright kid who is trying to get enough money to pay his tuition money for Princeton by playing online poker. However, he doesn’t get lucky enough and loses all his savings. Eventually, Richie discovers that the game is fixed and pursues the owner of the site Ivan Block, who is played by Ben Affleck, to get his money back all the way to the headquarters in South America. Due to the lack of regulations and laws in online gambling, the fictional site where Richie was playing not licensed, which is a real issue in South America, even in 2019. In the States, however, players are facing all types of regulatory restrictions, and just a handful of casino companies have the chance to operate legally. Only in 4 states out of 51, US citizens could potentially enjoy, for example, unlimited offers at Unibet Casino with NJ license. So the movie carefully and very realistically encapsulates the gaming situation in South America.

What is also exciting about the movie is the fact that Leonardo DiCaprio is one of the producers who, along with Ben Affleck as director, know a lot about gambling and poker playing. That said, you can expect a mix of challenging situations and well-thought storylines where money, ladies, passion and pride become the ones who play the leading roles.

“Alpha Dog” is a crime movie inspired by a true story. Frankie Ballenbacher (Justin Timberlake) is a posse of a Los Angeles drug dealer Johnny Truelove (Emile Hirsch). Eventually, Johnny argues with one of his customers Jake, who owes him money and everything goes wrong. Frankie and his crew kidnap Jake’s 15-year-old half-brother Butch (Anton Yelchin) and hold him as a hostage. Timberlake ends up with the role of babysitting the hostage, a responsibility he concludes by merely exposing the kid into his party lifestyle. Even though Butch has numerous chances to escape, he doesn’t. He starts partying with them, playing video games and having a good time – until things spin out of control.

The central theme of the movie ends up around lousy parenting, and the director Nick Cassavetes shapes a scathing criticism on how the authority void left by immature, self-involved parents is soon filled by the dangerous power of their children’s making. In most areas, Cassavetes’ senses are spot-on, particularly when it comes to casting Timberlake in what turns out to be the most compelling character in the film. He manages to be both dangerous and genuinely charismatic and ends up stealing the spot.

Although the name might hint at where the plot is headed, this movie is not about Facebook entirely; it’s much more than that. The film examines how a Harvard student Mark Zuckerberg (Jesse Eisenberg) who cares little about money became the world’s youngest billionaire yet lost his one true mate. The movie starts with a heavy dialogue between Mark and his girlfriend Erica (Rooney Mara), a scene that dwells deep into his impulses to create one of the most famous, powerful, and profitable inventions of all-time.

Even though he becomes the worlds’ youngest billionaire, Zuckerberg has to battle million-dollar lawsuits and face accusations of stealing the concept of the social networking site from his Harvard mates and cheating his best friend and CFO, Eduardo Saverin (Andrew Garfield). Justin Timberlake joins the lawsuit gang and gives a sharp performance as Sean Parker, a savvy entrepreneur who founded Napster and takes Zuckerberg’s creation to Silicon Valley. This movie is a definite must-watch since everyone in this cast delivers excellent performance, and they make their characters more than just personalities submitted for our affection or tease.

Dionne Gesser has been combining words, Fashion & Music on her blog 'DiFashionista' since 2012. You can find all of her work on difashionista.blogspot.com and contact her on twitter @DiFashionista/@ItsMeMissDi_Je. Dionne is also an exclamation mark addict, a rebel with a cause and an Indie Music enthusiast. 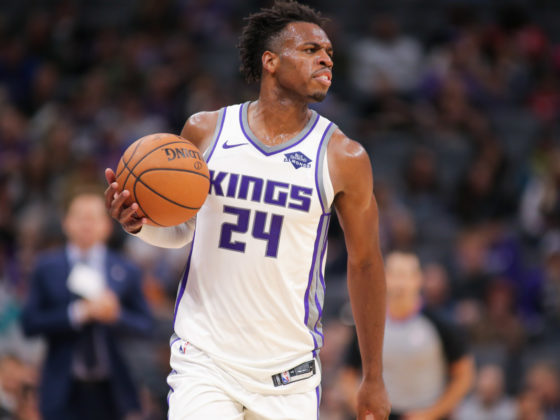 Buddy Hield Wants a $110 Million Extension From the Kings

Why online bingo is a social game for women