On the days of September 18th and 19th, Concord’s main amphitheater, Concord Pavilion was packed with stand-still traffic for almost a mile, a parking lot filled with hundreds of people from all over the USA, golf-carts and tour buses. With the venue capacity of 12,500 people, this concert was filled with people of every background all dressed in either comfortable and cool attire.

Making history as the first female-owned-and-curated music festival to take place in decades with its first event in September 2019, the Lights On Festival came harder than ever this year (shoutout to the pandemic for more preparation time). A confirmation of the 2019 event’s success, both shows in Concord immediately sold out within 24 hours. Call it special treatment, but H.E.R.’s hometown Vallejo being only 25 minutes away from Concord meant that she wanted the audience to feel like they were at home with her. As soon as you walk 5 feet into the concert, you see the Illumination Stage and the film screening tent filled with people sitting on lawn chairs watching a documentary on H.E.R. Additionally, up the hill there’s a pink museum called the “H.E.R. House”, that is a mini guitar lounge that displayed three of H.E.R. ‘s guitars and allowed people to take photos with it. Now we also can’t forget the rides and other photo attractions that completed the overall festival aesthetic.

The day started off at the Illumination Stage with Philadelphia’s very own Brianna Castro at 2:30 PM who took the crowd away with not only her voice but guitar skills too. On Sept. 22nd, Castro released a new single called “Do It Again” on all streaming platforms. Shortly after, 22-year-old Lorea Turner from Indianapolis came smiling down the stage with her white 70s themed outfit and angelic voice. Soon came the talented singer, songwriter, and occasional background vocalist for H.E.R. from New York, Ajanee, who kept the crowd on their feet with her passionate performance. Afterward, the 24-year-old singer, Lovergirl, Samaria, from Oakland, rocked her first festival and posted to Instagram on 9/21 that she’s still on a high from Saturday’s performance.

“Used to get my hair and makeup done in a bumpy car ride on the way to the venue…This was my first festival & trailer…these days been looking brighter and I couldn’t feel more grateful,” Samaria said.

Immediately after Indianapolis, Indiana singer Maeta carried the crowd with the performance of her song “B*tch Don’t Be Mad” on her album Habits that dropped on April 30th of this year. It was announced at the beginning of September that Maeta will be joining H.E.R. on the “Back Of My Mind Tour” starting on October 10th in Franklin, Tennessee. To end the first day at the Illumination Stage, United Kingdom’s own Tiana Major9, allowed us to connect with our ancestors and spirituality by embracing the affirmations in her music.

People only had about 20 mins to prepare for LA’s own Blxst, who performed shortly after at the Fluorescent Stage. The sun started to go down and the feelings began to rise. With Foushee and Masego setting the tone after, you could just feel the energy shift the atmosphere. Oakland’s own Keyshia Cole gave a heartfelt tribute to her late mother Frankie, who tragically passed away in mid-July after a long-fought battle with addiction, by asking for a moment of silence followed by singing “Heaven Sent” in honor of her.

Ty Dolla $ign brought the West Coast vibes back by bringing out Pinole’s own P-Lo, who performed “Put Me On Something ft. E-40” and had the entire crowd on their feet. Leave it to Mrs. Bag Lady, aka Erykah Badu, to heal our souls with her neo-soul vocals and moving stage presence.

At the rate this festival is moving, it’s hard to believe that this is only the second year of it.
“Gotta go to every Lights On Festival now that sh** was a vibe” (@Karissa via Twitter).

Post COVID-19 shut down, this year alone, allowed more fans, artists and gatekeepers to recognize the power of the festival, which is mainly the consumer and influencer power of Black women — and got on board.

Lights On Festival had the power of bringing people together from the East Coast, Midwest, and West Coast to enjoy two days of R&B music. Not to mention, the weather was hotter on the second day. As a result, the day started at 2:30 PM with Maxx Moor, Muni Long, Marzz, Joyce Wrice, VanJess, Tone Smith, and Sinead Harnett at the Illumination Stage. For SoCal-based singer, Joyce Wrice, this was a special moment for her as it was her first festival performance ever.

At 6:30 PM, the women were screaming for Lucky Daye as he was the first performance at the Fluorescent stage. After Arizona born Kiana Ledé, who also goes by “Kiki”, which is also the name of her latest album that dropped in 2020, graced the stage with her voice. Dreamville Records’ only female artist, Ari Lennox stunned the crowd in her silver dress, matching heels, anklet and of course voice too. Not even 10 minutes into her set, Lennox proceeded to take off her heels and said with laughter, “I hate being a ratchet b*tch”.

Now at this time, it’s about an hour until H.E.R. headlines the stage, but first Bryson Tiller had to show us that he was on the 502 come up. Performing songs from his iconic 2015 album T R A P S O U L, his latest 2021 album, “ANNIVERSARY” and previews of new music.

H.E.R. is known to be a woman that’s full of surprises. Let’s not forget when she first shared her gifts with the world in 2016, she disclosed her identity behind glasses and a silhouette. To point out, now she’s blossomed into a woman and musician that continues to break the barriers in the music industry. The symbolism of her “Back of My Mind” album cover displays H.E.R. with one showing that she’s focused on remaining vigilant and cautious for something and someone. Officially, a Grammy and Oscar winner, she brought out artists that shaped her last album but also keep her motivated

Coming out to “We Going Crazy” produced by DJ Khaled ft Migos, H.E.R. had no doubt that the crowd was with her that night, stronger than ever.

Before she transitioned to the next song, she told fans, “don’t let anyone tell you that you can’t be anything,” said H.E.R. If you paid close attention to the festival flier, it stated “H.E.R. and friends” and that’s exactly what happened that night. Appearances from Yung Bleu, as they performed their song “Paradise”, the Bay Area raised and Icy Wifey herself, Saweetie came out to “Best Friend”, the one and only Chris Brown astonished the amphitheater pit as he performed “Come Through” and “Have Mercy” star Chloe Bailey ended the night with H.E.R. as they shared a rockstar moment together.

Fans are still reminiscing about the full concert experience on social media. Twitter user Veronica, (@SpicyJalapenoo) said on 9/21 at 5:20 pm, “Seriously still can’t believe H.E.R really brought out Chris Brown during her performance at her #lightsonfestival. Even if he performed for .5 seconds, my heart is SO happy!!!!”.

With the reputation of being a strictly R&B Festival, in about three weeks, H.E.R. & crew will be continuing this party at Barclays Center in Brooklyn, NYC on October 21st and October 22nd. There’s a venue capacity of 19,000 and tickets are still available to be purchased today. This time there will be performances by 6Lack, SWV, Queen Naija, Victoria Monet, Skip Marley, Maxwell, and more guests to be announced. Everybody deserves to attend a Lights On Festival at least once in their lifetime. Remember, it’s more than a festival, it’s a celebration of R&B! 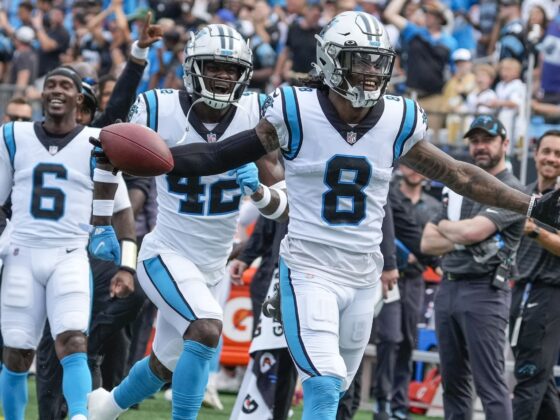