Unified welterweight champion Errol Spence Jr. has no interest in sharing the ring with his PBC stablemate Keith Thurman.

“[Keith] Thurman? [I’m] not fighting that man. That [man] wouldn’t utter my name when we [were] both champs,” he tweeted on Friday night.

When a Twitter user continued to challenge him to share the ring with Keith Thurman, Spence Jr. shot down the idea yet again.

“Thurman would [knockout] you out in [seven rounds],” one person tweeted.

“The world will never know,” he replied.

As the conversation developed, boxing journalist Mark Ortega hopped on the app and explored a potential path for Thurman to earn a fight with Spence Jr.

“So Keith’s best chance would be to position himself as a name opponent for the #CharloCastano2 winner and meet you for undisputed at [super welterweight]?” Ortega asked.

“I’m ahead of him up there too,” Spence Jr. answered.

At the moment, it appears that there are no potential pathways for Keith Thurman to earn a title shot against Spence Jr. Instead, the Texas native appears to be focused on finding his way into the ring with fellow welterweight champion Terence Crawford. Following Spence Jr.’s stoppage victory against Yordenis Ugas, he called out Crawford.

“Everybody knows who I want next; I want Terence Crawford next,” he told the world on April 17, 2022. 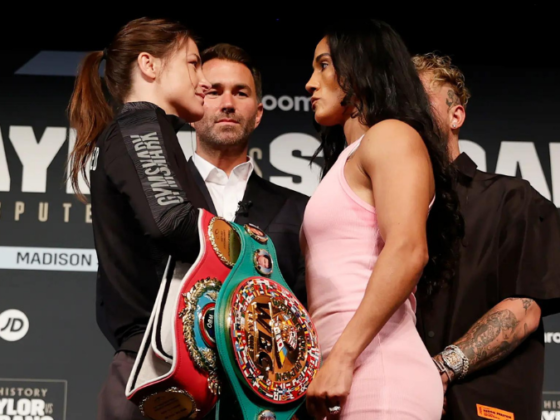 How To Watch: Katie Taylor, Amanda Serrano Fight For History