On a Friday night, the NBA attention was turned to Texas to watch the glitzy Los Angeles Lakers combat Luka Doncic, Kristaps Porzingis, and the Dallas Mavericks. The end result was as advertised, and the competition as fierce as any contest you’ll see in early November. Even though the Mavericks ultimately lost to the Lakers in overtime, there were signs that Dallas is prepared to make the leap into conference contention.

Dallas has impressed so far through 20 games, led by Doncic’s comprehensive offensive prowess. Head Coach Rick Carlisle has developed a system suited to the twenty-year-olds strengths – uncanny shot creation and egalitarian passing vision. And so far, Doncic has rewarded Carlisle’s ingenuity. At the time of this writing, the Mavericks boast the league’s most efficient offense, per Cleaning the Glass.

The Mavericks’ defense still leaves a little to be desired, having allowed 109 points per 100 possessions. Though these measures are far from solid, both indicators resemble consensus preseason expectations for the Mavericks. The offense would be their defining strength, and their defense would lag behind the rest of the league.

The Mavericks were generally forecast to be on the bubble of the Western Conference playoff picture before the start of the season. Some projections were bullish on their potential, such as FiveThirtyEight’s preseason RAPTOR model. But most models favored the Warriors, Spurs, Pelicans, and Trail Blazers.

To better model Dallas’ expected outcomes this season, we need to first understand their performance in context to their competition.

At a macro level, the Western Conference largely resembles the consensus expectation two weeks into the season. The favorites – the Lakers, Clippers, Jazz, Rockets, and Nuggets – have all shown championship promise. (Kingly ignore the Rockets’ defensive struggles against the Washington Wizards). Two of the outsiders in consensus preseason projections, the Timberwolves, and the Suns, have exceeded expectations thus far. Both will be interesting to monitor for the rest of the season.

The Warriors have undeniably underperformed, though there were preseasons doubts about their short roster and dependence on Stephen Curry and Draymond Green. Curry’s broken hand recovery timetable likely cements the Warriors in the lottery. Green hasn’t proven the ability to lead an NBA offense alone and, as a result, Golden State is heading back to the high-end of the lottery.

San Antonio, as if doubling-down on their success last season, is once again defying regression expectations. Through twenty-two games, they’ve compiled an above-average offense by taking over 45% of their attempts from the mid-range, per Cleaning the Glass. But the Spurs’ defense has regressed to 25th in the league, allowing 114 points per 100 possessions. With the reintroduction of Dejounte Murray into the lineup, it will be interesting to track San Antonio’s defense over the next two months. Currently, the Spurs have one of the better defensive shot profiles in the league, allowing opponents to take just 67% of their total attempts at the rim and from outside.

The Pelicans’ twenty-one game sample is one of the most difficult to analyze. Zion Williamson hasn’t played a regular-season minute due to injury. The Pelicans have matched up against some of the league’s best teams, defeating the Nuggets and losing in overtime in Toronto on opening night. They’ve also lost to both the Thunder and Warriors (looking worse every day). The Pelicans’ defense is giving up the third-most shots at the rim and an average percentage of attempts to opponents from outside. Regardless of the addition of Williamson, New Orleans won’t recover if they don’t change their defensive strategy.

The Trail Blazers are trending downward after losing close games to the league’s best teams. Even with the roster overhaul this summer, an above-average offense fueled by All-Star guard play was expected. CJ McCollum has started slowly, largely driven by a lower than expected field goal percentage at the rim. Shooting numbers this early are fluky. Portland’s biggest question mark for the next two months will be team defense, hampered by an inconsistent frontcourt rotation due to injuries. Through the first 10 games, the Blazers forced opponents to eat their vegetables, coaxing above-average offenses into settling for mid-range attempts. If they recommit to allowing the right shot profile and supplement their strategy with rim protection, their defensive efficiency could trend towards league average.

So far, Dallas’ prospects look brighter than their competitor’s.

Luka Doncic deserves a lion’s share of the credit for Dallas’ success so far. He’s already learned how to play with Kristaps Porzingis. Their affection for one another’s game is palpable. Doncic is always scanning for Porzingis in the backcourt:

Even in the halfcourt, Doncic delight in tricking the defense into thinking he’s going to do anything but feed Porzingis early:

Tristan Thompson, one of the NBA’s smartest defenders, realizes the tomfoolery as soon as Doncic drops his pace. It doesn’t matter. That split-second is all Porzingis needs to get off a clean look.

Watching the NBA from a couch, it’s hard to appreciate immediate chemistry on the court. As coaches and players attest to openly, it takes years for a connection to form between a new set of teammates. And the connection goes beyond just Doncic and Porzingis. Per NBA Stats, 59% of Dallas makes so far this season have come off an assist.

Dallas’ backcourt depth is a pronounced strength in the loaded Western Conference. Jalen Brunson has already become a staple in Rick Carlise’s rotation. He’s mastered the in-out dribble, practically a magic trick when utilized by left-handers:

Defenders underestimate Brunsen’s strength when he penetrates. Per Cleaning the Glass, he’s made the shot attempt on 60% of fouls drawn, which is in the 90th percentile for players at his position.

Brunson’s defensive intensity has helped raise Dallas’ overall defense to a respectable level. But Brunson is a difficult fit with Doncic offensively. Carlisle wants the ball in Doncic’s hands for the final minutes of every game, relegating Brunsen to off-ball duty. Can he play crucial minutes as a mere catch-and-shoot threat?

Seth Curry is the optimal backcourt pairing and has won the starting minutes so far this season. The additional attention he attracts on the perimeter provides Luka with more room to operate. Curry led the league in 3-point percentage last season, but he’s shooting 35% on 4 attempts per game so far this year. With more minutes alongside Doncic and Porzingis, he should be able to bump his accuracy towards last season’s threshold.

Defensively, the Mavericks have a plethora of forwards to throw at opposing swingmen. Dorian Finney-Smith is Carlisle’s preferred on-ball defender when the Mavericks match up against elite perimeter scorers. Through four seasons, his defensive impact has been mixed. To have a chance of defending against the West’s best offenses, Finney-Smith will need to elevate his defensive game further.

The Mavericks can utilize Maxi Kleber when opponents “go big”, and he’s even quick enough to keep up with athletic forwards like LeBron:

Kleber is a viable option when switching pick-and-roll or pick-and-pop options as a last resort. Ditto for Dwight Powell, who revels in the opportunity to try and defend the very best. It’s hard to quantify exactly how much impact both have defensively (it’s hard to quantify any individual player’s defensive impact through box-score statistics).

Both Kleber and Powell are entering their “primes” (27 and 28 years old, respectively). It is probably too late for either to develop a dependable outside shot to compliment Doncic offensively. It’s tough to play both together in general. With Kleber stalking the perimeter as a semi-capable threat, Powell is relegated to the baseline where he clogs driving lanes.

Doncic still attempts to maneuver through cramped space to whiz unnecessary passes. He is still learning. Sometimes he takes one too many dribbles into the paint, without calibrating his next move:

Nitpicking Dallas’ stylistic flaws is an exacting exercise given how well Doncic has played through a season-plus of his career. His ability to commandeer a high-level NBA offense, at twenty-years-old, has far exceeded even optimistic expectations. He’ll continue to learn how to handle increased usage more efficiently. Snagging Porzingis to pair with Doncic was a masterful move by Dallas, and a wise gamble given the near-limitless potential upside. As the two develop even greater chemistry, they could join the conversation as one of the league’s elite duos.

For now, Dallas has demonstrated that their offense can carry them to postseason contention. Over the next few months, we’ll get to learn more about the Doncic offensive system, and see how Carlisle elects to use his wunderkind to challenge the very best in the Western Conference. 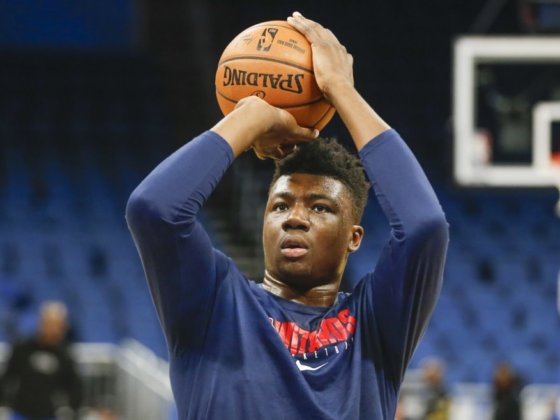