Now before you all die of laughter, let it be known that this year will not be the year of the Sixers. Not at all, by any means. In fact, maybe not even next year, but in the future the Philadelphia 76ers are creating something that possibly could set them up for success to dominate the NBA.

Let’s look at what the Sixers have currently on their roster and what they have done in the past two years.

Michael Carter-Williams and Nerlens Noel were drafted in the first round last year, Noel missed the entire season due to injury and MCW won the Rookie Of The Year. The Sixers got rid of Evan Turner and acquired Danny Granger, primarily just to get some more cap space. Now the Sixers did not make one big signing this offseason, unless you consider Byron Mullens a big time signing.

They had a league-high seven draft picks in the 2014 draft. They used those picks to get Joel Embiid, Jordan McRae, K.J. McDaniels, Adonis Thomas, Jerami Grant and Dario Saric. The Sixers have the second youngest roster in the NBA at an average of 24.7 years old, but if they get rid of 33 year old Jason Richardson, they will be the youngest team in the league.

Now the Sixers do not have a single contract worth more than Five million dollars that is guaranteed beyond this upcoming season. Not one. Micheal Carter-Williams, Nerlens Noel and Tony Wroten Jr all have team options which i believe the Sixers will pick up and the rookies drafted this year have not finalized their deals quite yet.

The potential on this team is through the roof. What Philadelphia is building is a reincarnation of one of the forgotten and many times failed idea of the “Twin Towers” in the NBA.

In the 1980’s the Houston Rockets, in back to back drafts, drafted big men Ralph Sampson and Hakeem Olajuwon, the original “Twin Towers” in the NBA. For four years, the Rockets dominated with a pair of 7-footers inside. Sampson won the Rookie of the Year award in 1984 and Hakeem finished second in that award to Michael Jordan in 1985. They were both named Western Conference All-Stars in three consecutive years together and dominated inside at any costs. Sampson averaged 19.7 points, 1.7 blocks and 10.5 rebounds per game through those four years alongside Olajuwon who himself averaged 22.5 points, 11.6 rebounds and 2.8 blocks per game. Domination for only four years due to Sampson being shipped out to the Golden State Warriors after getting injured and falling out of favor with then coach, Bill Fitch. Olajuwon went on to have one of the best careers of any NBA center and is one of the best of all-time.

Then in the late 1990’s the San Antonio Spurs already having a former MVP, Defensive Player of the Year and All-Star in David Robinson needed to help him out, as he was getting a little older. The Spurs drafted Wake Forest Center Tim Duncan in 1997 and immediately, the two big men jelled and took San Antonio to new heights. The Texas Twin Towers came back to fruition when Robinson and Duncan brought two NBA Championships to the Spurs in 1999 and 2003. Duncan averaged 23.3 points, 12.5 rebounds and 2.5 blocks per game while Robinson was in the twilight of his career but averaged 15.2 points, 8.7 rebounds and 2.3 blocks per game. 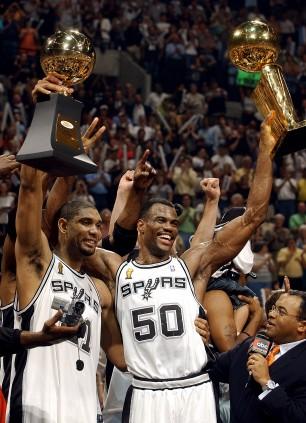 Now to present day, the Sixers are building what may be the next big thing inside for the NBA. The most recent team to try this idea is the Detroit Pistons, but did not let it create itself at all. Greg Monroe and Andre Drummond were very raw coming out of college but the Pistons wanted to get immediate results. They traded for Brandon Jennings and Josh Smith, immediately taking the ball out of Drummond and Monroe’s hands and it has not worked, at all.

The Sixers have a plan in place to use the very effective Michael Carter-Williams as the lead point guard to create for the two big men, Embiid and Noel. The Sixers using MCW as the quintessential point guard to feed the ball inside works. It just makes sense to keep this big three around. MCW, Embiid and Noel, if all healthy and if they do develop properly will be the next reincarnation of the “Twin Towers” in the NBA but with a twist, an actual good, potentially great, point guard. This team drafted shooters and scorers to accompany MCW when he’s at the point and help score when the defensive minded Embiid and Noel may struggle.

This is the scary thing to think about. In five years, if all developed properly, the Sixers could have the best one-two punch inside with Embiid and Noel along with what could be an elite point guard in Michael Carter-Williams. Teams should begin planning soon for what could dominate the NBA and for a while.

I don’t think a team in the NBA would be able to consistently be able to go inside when you face these two monsters in Philly. The city of brotherly love may be down on their luck as of late but the plan they have in place could be one that changes the NBA landscape, for quite possibly the next decade if all goes according to plan.