If you’ve got 5 minutes to spare and need a refresher on the ‘Game of Thrones’ saga, here is a quick breakdown of what happened in Season 5. Then, and only then, you can bask in the warm embrace of the Lord of Light.

Season 5 opens with Cersei dreaming about a witches prophecy claiming she’ll one day lose everything she holds dear. That prophecy seems to be coming true as Cersei is mourning the deaths of both Tywin and Joffrey and cursing the name of her brother Tyrion Lannister.

Making matters worse, Cersei is losing influence over her 2 surviving children. Tommen never the brightest bulb in the Lannister basket, is infatuated with his new bride Margaery While Myrcella is in Dornish custody, absolutely hating it (Sarcasm).

Cersei solves the first problem by sending Jamie and Bron to Dorne to save Myrcella. As for Tommen, she tries to use the rise of a phonetic new religious-sect called ‘the sparrows’ to her advantage. At first, this works. Lorris is arrested for homosexuality and Margaery for perjury.

Unfortunately, Cersei is given a taste of her own medicine when she too is arrested by ‘The Sparrows’ for all that crazy Lannister incest. After plenty of psychological and physical torture, Cersei finally confesses and is subjected to the Westeros-y walk-of-shame. To add insult to injury, Myrcella is released by Prince Dorn only to be poisoned to death by the Sand Snakes shortly after. Cersei’s only good news this entire season is that the Mountain is now back as a vicious monster.

On the other side of the world, Daenerys deals with a rebellion of her own in the form of masked assassins called ‘The Sons of the Harpy’. One attack, claims the death of a noble friend and injuring Greyworm. 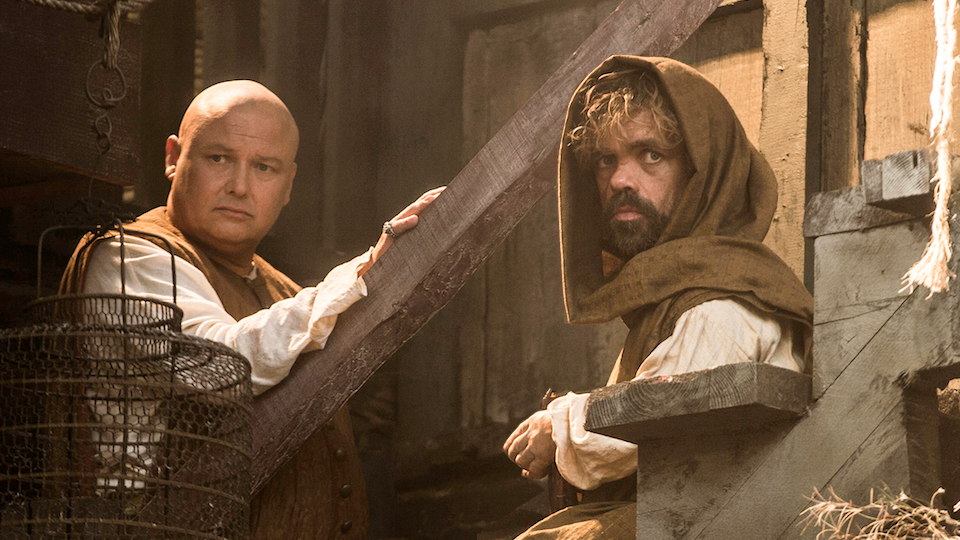 Tyrion and Varys make their way south to plead their case to Danny, only for the disgraced Sir Jora to kidnap Tyrion as a way to win back Danny’s favor. It sort of works, but not before Jora is infected with the terminal disease known as Grey Scale and Danny finds herself stranded in Dothraki territory after being ditched by one of her dragons.

Arya makes her way to Bravos and is accepted into the House of Black & White. However, she struggles with the challenge of leaving her past behind and truly become no one. Arya is given an assassination mission by Jaqen H’Ghar, only to go off-script when she spots Merrin trant. Even though she is able to cross one of the names off her kill-list, as punishment for betraying the faceless men, Jaqen commits suicide and Arya is turned blind.

Sansa is having an even worse time in Season 5. Little Finger uses her as a pawn in his schemes, marrying her off to Ramsay Bolton– who jumps all the way to the top of the most-hated Game of Thrones charts. Ramsay is about as terrible as we’ve expected.

Farther North at the wall Jon Snow refuses to join Stanis Baratheon, sacrificing his chances of becoming Lord of Winterfell in order to become Lord Commander of the Knight’s Watch. Not everyone is thrilled of his promotion, fearing their new leader is too sympathetic to Wildlings.

Jon brokers peace with the Wildlings and heads North. There, he and his fellow rangers survive a brutal White Walker attack. Battered and defeated, his comrades can only watch as their dead companions become White Walkers themselves.

Stanis’ short-lived attempted to conquer the north ends in failure as Ramsay Bolton proves a far craftier foe. Faced with mounting losses and mass desertion, Stanis sees no choice but to have Mellisandra sacrifice his daughter Shireen to the Lord of Light. Later on, Stanis’ army is crushed by the Bolton’s and Stanis dies in the efforts to take over Winterfell– which is well deserved.

Jon Snow returns to chaos at the end of the season, Jon’s list of allies is growing extremely small at the Knight’s Watch. That becomes painfully clear when Jon is assassinated by his own men and even more clear when they leave him to bleed-out in the cold, winter night.

And that, is how Season 5 ends. With arguably, one of the biggest cliffhangers in Television history.