The conference finals are upon us. The  Western Conference is down to two final teams and this is when things get really interesting. The first two rounds of the postseason provided plenty of entertainment, drama, and suspense. There were sweeps and tough series and plenty of heroic performances. It’s the Los Angeles Clippers taking on the Phoenix Suns. Paul George, Terance Mann. Devin Booker, Chris Paul. There are legacies on the line and stories to be written, so let’s get into the Western Conference Finals preview.

Over the course of the playoffs, the Clippers have not shown great dominance, but then again few teams in the west did. What they did show, after losing Kawhi Leonard to a potential ACL injury, is that they have some grit and determination in them. Terance Mann was excellent in the Game 7 victory over the Utah Jazz. Seth Curry has been playing very well in the postseason and will be vital in Leonard’s absence.

The game plan is fairly simple for the Clippers. Paul George is now the sole centerpiece, the offense goes through him, and at least two other players need to step up. It could be Mann, Curry, Marcus Morris, it doesn’t matter who, there needs to be another 20 point scorer and hopefully four players in double digits. Reggie Jackson was one of those guys in Game 7 as well, putting up almost 30 points himself behind Mann’s 39.

REGGIE JACKSON DOES NOT CARE ABOUT A DPOY TITLE ??pic.twitter.com/QdVThAtdhm

Paul George handled business in Games 5 and 6 against the Jazz. Without Kawhi Leonard, he was able to score 65 points combined in both games along with 25 rebounds. He was able to get to the free-throw line for 18 free throws in the crucial last two games of the series. Of course, he was helped out by his supporting cast members, but Paul George lived up to his Playoff P nickname against the top-seeded Jazz. Without his great play, the Clippers don’t close the series in six games.

The Phoenix Suns should be feeling nice and rested and confident heading into this series. They swept the Denver Nuggets and MVP Nikola Jokic and had just about a week to rest up between series. However, point guard and vital piece to the Suns’ success, Chris Paul has been in COVID health and safety protocols and will miss Game 1 of the series, at least. Of the players tested in the NBA this week, only one tested positive. While the NBA cannot comment on a specific player’s health status, it is likely Paul is the positive test.

This turnaround by Booker ? pic.twitter.com/PaeBHjnrr8

Devin Booker will need to step up and take on the role that is destined for him. He is the prototypical modern shooting guard and has the potential to lead the league in points someday. He needs to bring it in the series, especially as long as Paul is out of it. Against the Nuggets, Booker and the Suns played through the two guards mentioned. They also got a lot of help from other players by spreading the ball around on offense. Deandre Ayton has been evolving before our eyes. Then there is the rebirth of Cam Payne’s career. He has been one of the most reliable scorers on the Suns’ roster and gives great minutes on defense.

The Suns have looked like the best team in the Playoffs simply due to that sweep of the Nuggets. Booker averaged 25.2 points per game along with 7.7 rebounds in that series. He has shot great from the free-throw line, 87.5%, but was not great from three. He can be a bit streaky from deep, and he may be due to go off against the Clippers. The good thing is he has been solid from the field as a whole, shooting under 40% only twice in 10 games this postseason.

Crowder on one end and Booker on the other. The Suns are rolling early in Game 4 ? pic.twitter.com/Zo8wG99JAw

When these teams meet up tonight for Game 1 of the WCF, it will hopefully tip off a wonderful series between the two great teams. The Suns should be the favorites going in, and if they are able to get Chris Paul back in time for Game 2 I think they have a good shot at taking the series in six games. I am not sure how long the Clippers can rely on guys like Mann and Jackson to put up 25+ points per game, or really 18+ points per game. They can do it in spurts, but can they maintain long enough to win four games over the Suns who seem the be the West’s best?

The series starts with Game 1 at 3:30 PM EST this afternoon. 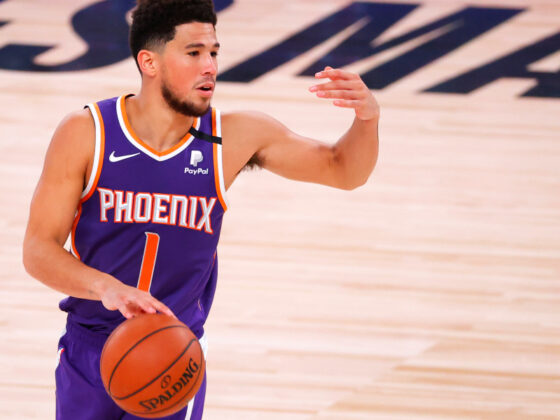